Since the Mid-Sixties, college enrollment has tripled. We have seen a huge emergence of new tech and vocational schools as well as for-profit universities. There’s many new educational options for students who want to further their education.

Technology has evolved and entry-level jobs that require minimal skills are becoming more obsolete with every passing year. Many jobs have been replaced or are no longer needed because of automation. This has certainly contributed to the increase of students pursuing additional education. Gone are the days of only having a high school diploma and easily finding a job that pays a livable wage without performing manual labor.

While I don’t think higher education will continue to be more popular and pursued by more students, I do think the current system is currently in the later stage of a boom and bust cycle. In the last decade we saw the housing market go through a boom and bust that I firmly believe this will happen to our education system.

In the figure above there’s been huge growth in the average tuition costs and fees charged by US colleges. It’s hard to argue that this type of growth is sustainable for the long run.

Financial aid continues to be one of the biggest things that graduating students fear. There’s many reasons to fear it, if a graduate never finds a job and is unable to pay back the loans there isn’t even any sort of bankruptcy protection. The even more worrisome part is how easy it is for students to receive it. The housing market happened largely because of how easy it was for almost anyone to receive a mortgage, but it’s even easier to receive student loans. The common notion has been that there doesn’t need to be much screening since the person has already qualified by getting into a school and that they will have substantial income after graduation. We clearly haven’t learned from the Subprime Mortgage Crisis as the same issues that caused it present themselves in the current student loan situation.

It’s pretty low hanging fruit, but a very easy example that shows the issues of the student loan situation is art majors. The major is often joked to be the precursor of working at Starbucks. There are a decent amount of well paying jobs that an art major could receive after graduation, however there are far more graduates than there are jobs. The issue with this, is that every art major can get financial aid while those awarding the loans know perfectly well that it’s going to be a very low percentage of those students who will actually get an applicable job after graduation.

To put this another way, think of the student loan as an investment in the student and think of the loan issuer as the investment banker. It makes absolutely no sense for an investment banker to issue loans to every student who pursues any sort of degree. It may be a great idea to invest in a student pursuing an art degree at a highly regarded institution who has excellent grades and already has experience in the field as they will likely find a job after graduation, but it makes no sense to invest in a student with poor grades at a lousy school as the likelihood of them finding an applicable job after graduation is very low.

In the graph above, financial aid is mapped out by the source and then stacked to show the total amount given each year. It’s amazing how steady the graph is and then how quickly it starts to take off. 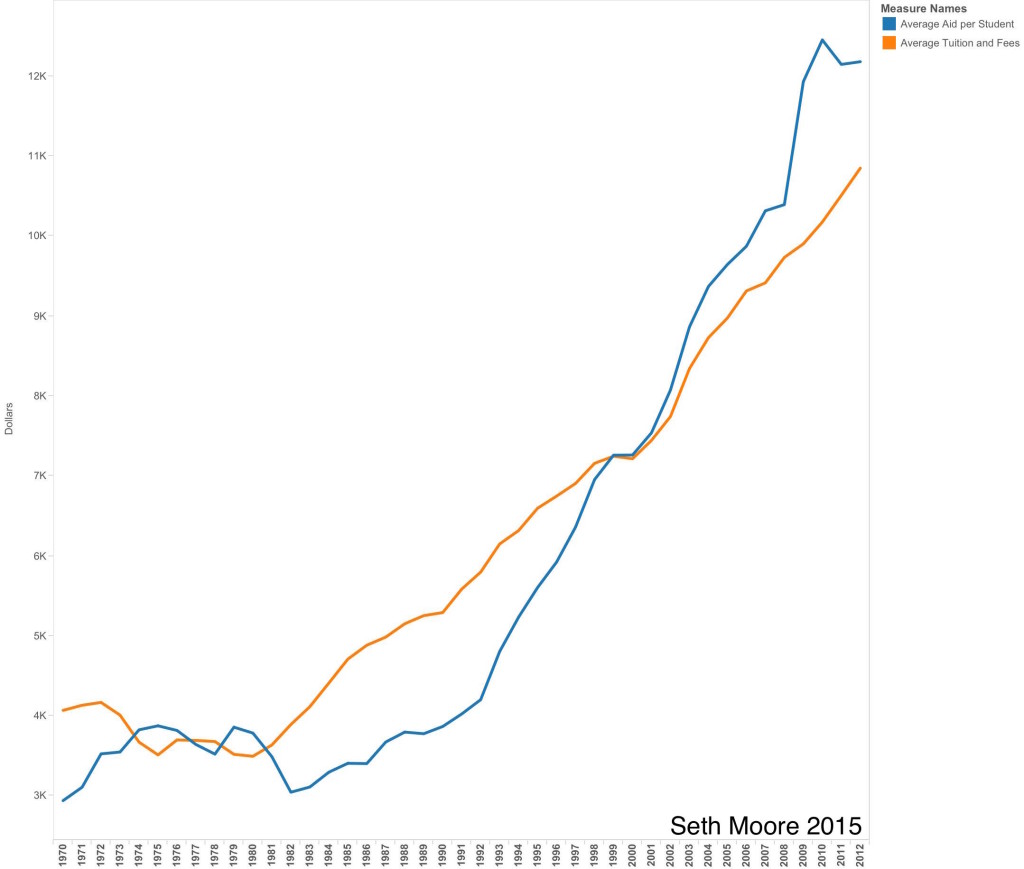 To go further, in the graph above, average aid per student is graphed along with the average tuition per student. Here it gives a good picture of how exactly the two have gone back and forth over the years. In the past two decades, the average amount of financial aid received per student has tripled. For reference, the average inflation rate between 1990 and 2010 was about 2.75%. At that rate it’d take just over 27 years for the price of something to double. The growth of college tuition and the inflation rate are vastly different.

The only graph that shows a steady, relatively linear increase is enrollment. Higher education, or just education, has always been important and is only getting more important. With the rise of automation and machine learning, increasingly more lower level jobs are being eliminated. The days of needing unskilled labor are diminishing, especially in jobs that don’t involve manual labor. Pretty soon, nearly every job will require some sort of specialized training or education. That’s why the rise in enrollment makes complete sense.

On the other side of this, we have the cost of higher education. It’s been skyrocketing and there has to be an end. As important as the product may be, there’s no possible way that this trend will continue. The end may not yet be in sight, but I’m confident that it’s coming.

The scarcity of the product that higher education institutions sells has greatly been diminishing with the availability of education via other sources, namely the internet. These days you can go on YouTube or a specialized learning website, such as Khan Academy, and learn just about anything. You can learn advanced calculus for free, at your own pace, without spending any money. The beauty of education is that the end product, knowledge, is just as valuable no matter where it was obtained. The only difference is whether or not a certificate or diploma is awarded which can also be valuable, there’s also the issue of indirect benefits such as the experience of college.

Besides being cheap or free, there are other benefits that the internet provides. While it still may not allow eduction to achieve perfect market efficiency, it is much closer. The biggest single reason education on the internet gets closer to this is because of it’s mobility. An astronaut could take an online class while aboard the ISS, but couldn’t attend a typical college class.

The future will be interesting. It’s harder than ever to be successful, but there’s more opportunity than ever.

Data pulled from the following sources:

thus, you can be accredited a unsecured or secured loan People can timely locate a secured financial loan as they can sign up
for greater quantity of funds cover anything from Therefore most of these
credits is going to stabilize your hard earned money
condition within the absolute best approach

Hi there would you mind sharing which blog platform you’re working with?
I’m looking to start my own blog soon but I’m having a tough time choosing
between BlogEngine/Wordpress/B2evolution and Drupal.
The reason I ask is because your design and style seems different then most blogs and I’m looking for something unique.
P.S Apologies for being off-topic but I had to ask!

I’m using WordPress, it’s by far the most utilized blog platform out there. Because of it’s popularity it’s very easy to work with, find plugins, and find answers to issues. The design is the stock, 2016, template with just a few small tweaks to suit my website. The best part of WordPress is that with most web hosting packages you’ll be able to install WordPress with a few clicks, and then a few more clicks to get it up and running. You can do quite a bit of work and customization without knowing any sort of HTML / CSS /… Read more »